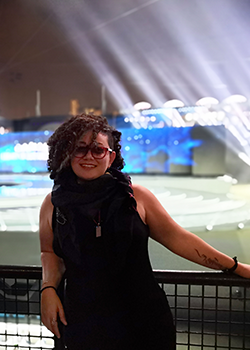 Layal’s journey with music started at the age of 9, when she got accepted into the conservatoire in Damascus to learn the violin, but later that year she started learning the piano and obtained her degrees from the London Trinity Collage of Music.

Layal launched her career as a music composer at the age of 21, after working in several music production studios, including the biggest network in the Middle East, MBC.
In 2009 she opened her own studio in pursuit of her ultimate dream of composing for TV and Film. She started focusing on composing music for several different mediums including advertisements, TV series, documentaries, short films and feature films, across the Middle East, U.S.A, Canada, and U.K.

Besides being one of the biggest composers in the Middle East, she is also a very experienced voice over artist.

Layal was one of 300 handpicked talents from around the world to attend the Berlinale 2014 in Berlin, Germany.

Layal is the winner of 13 international awards, her latest being from the Global Music Awards in the US, and Hollywood Music In Media. 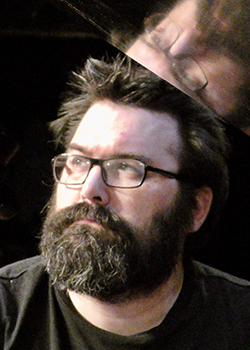 Julien Jaouen is a French composer, born in 1979. Son of a theater music composer and an actress mother, he begins his first musical experiences in the family studio… Lover of cinema before all the rest, it is towards the music movie he will be heading. Mainly oriented by orchestral composition, Julien Jaouen’s creations are eclectics and go through all musical genres. 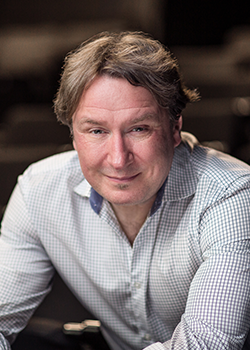 Steve studied composition and conducting with Canada’s music elite at Queen’s University: John Burge, Marjan Mozetich and Kristi Allik. In 1995, he received an AS Certificate from the world-renowned ‘Scoring for Motion Pictures and Television’ program at the University of Southern California. The opportunity to study in L.A. with such composers as Elmer Bernstein and Jerry Goldsmith was integral to his development as a composer for film and television. He also gained a great deal of experience working as a score coordinator with Christopher Young on such films as ‘Unforgettable’ (MGM), ‘Head Above Water’ (New Line Cinema), and ‘Copycat’ (Warner Bros.).

Mr. London now works in both Los Angeles and Toronto. He records regularly with European orchestras as a composer for the Munich-based SONOTON music library and has also written music for many feature films including: That Beautiful Somewhere starring Roy Dupuis and Jane MacGregor, Seduced By A Thief, starring Sean Young and Ron Perlman, and the cult horror hit, Shallow Ground (Universal).

Steve scored the powerful documentary, Chau, Beyond the Lines which received a 2016 Oscar Nomination for “Best Documentary (Short Subject)”. Steve also co-scored Born To Be Blue (the re-imagined Chet Baker bio-pic starring Ethan Hawke) which recently won the Canadian Screen Award – “Best Original Music for a Feature Film”. The film premiered at the 2015 Toronto International Film Festival and saw a worldwide release in March of 2016.

2018 saw the Tribeca premiere of his film Stockholm, (also starring Ethan Hawke) and the Christmas release of his film Love Jacked, starring Amber Stevens West, Keith David and Demetrius Grosse. Steve’s latest true-crime documentary mini-series Between Black and Blue (which he both produced and scored) is receiving a worldwide release, currently in the United States, Canada, the United Kingdom, Norway and New Zealand on Amazon and Apple TV. 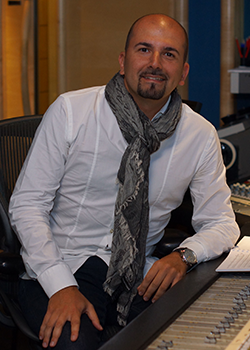 International award-winning composer Maurizio Malagnini (The Paradise, Call The Midwife) burst onto the scene in 2009, bringing to television his cinematic class and stunning melodies through his scores to numerous BBC hits.

In demand because of his ability to vary his palette of sounds and styles, each time bringing the audience to the heart of the story, Malagnini’s work on The Paradise was recognized with an EMMY® Award Nomination and has been hailed as a ‘masterpiece of musical storytelling’.

Maurizio’s score for the Feature-Ballet COPPELIA was awarded 2 IFMCA Awards from the International Film Music Critics Association in February 2022, including Best Original Score for a Fantasy/Science Fiction/Horror film and the most prestigious award – Film Score of The Year.

Maurizio has recently finished scoring season 11 of the hugely popular BBC series Call The Midwife and is currently working on a score for an animation and live action version of the ballet Coppelia. Further projects include the BAFTA Nominated film The C Word, a BBC TV-movie based on the book and blog by Lisa Lynch, featuring a minimalistic and subtle score mixing electronica with string orchestra and the epic full orchestral score for a 2-hour drama for ITV, Peter and Wendy, based on J.M. Barrie’s Peter Pan novel. The success of these projects resulted in Maurizio winning the title of Breakthrough Composer Of The Year from the International Film Music Critic Association in 2016.

Italian-born Malagnini’s first musical love was Italian Opera, especially the lyrical melodies of Rossini and Puccini. During his ten years of academic studies in Italian conservatoire, he came into contact with the music of the greatest Italian film composers, in particular Ennio Morricone and Nino Rota. Upon completion of his degree in symphonic composition at the Conservatory in Italy, Malagnini headed to the UK to attend the Royal College of Music in 2006, where he graduated with a Masters Distinction in Composition for Screen. 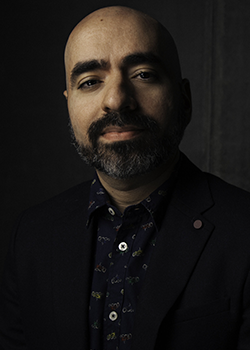 Sandro Morales-Santoro is an award-winning Venezuelan composer based in Los Angeles. Sandro specializes in music for film and television as well as interactive and new media. His most recent scoring projects include Marvel Animation’s film ‘The Secret History of Venom,’ as well as co-composing World of Wonder’s ‘Explant,’ a documentary exposé about the breast implant industry.

Sandro has collaborated on original music for hit tv-shows like Netflix’s ‘Outer Banks’ and Hulu’s ‘Good Trouble’. His skills as a composer are evident throughout his lush orchestral scores, which are always infused with hints of his diverse upbringing and culture. His eclectic style is the result of his journey as a musician; going from popular and folk music in Venezuela, to a classical music education, to jazz and electronic influences during his studies in the US. 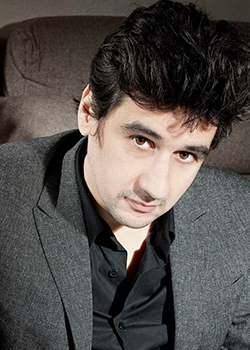 After studying at the American School of Modern Music in Paris, Jérôme Rebotier worked in many bands as a singer/songwriter. Universal Music France gave him a contract as a composer and he worked on several records for Olivia Ruiz, Horace Andy (Massive Attack) and many others.

In 1999, he composed his first movie score for Emmanuel Mouret’s movie, « Laissons Lucie Faire » with David Hadjadj. This led to his collaboration with other renowned french directors such as Tonie Marshall, Philippe Harel, Delphine Gleize, Matthieu Delaporte and Alexandre De La Patellière, Martin Bourboulon, Laurent Larivière, Sou Abadi, and more.
He has also worked on animated Movies such as Pierre Core’s “Sahara” in 2017, Huang Yun-Hsien and Tang Zhi-Zhong’s “The sick Rose” in 2021, and many International documentaries and films: « Slavery Routes (2018), The Mole (2010), and A Son Of Man (2019)… 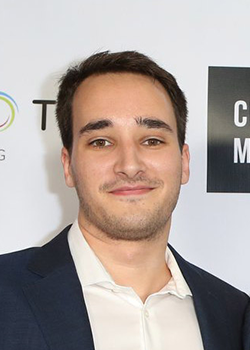 Steffen Thum is a composer for film, TV, games and advertising, based in Berlin. With over 70 credits to his name, he has extensive experience across high profile studio films, independent cinema, TV and advertising campaigns for Mercedes, VW and PFG.

Steffen is best known for his work on feature films Crawl (Paramount Pictures), iBoy (Netflix), Looking Up and Warning Shot, among others.

Since 2014, Steffen has also worked closely with top composers Hans Zimmer, Lorne Balfe and others, providing additional music for a diverse range of titles, including Mission: Impossible – Fallout, Marvel’s Black Widow, Bad Boys for Life, Ad Astra, The Lego Batman Movie, as well as high-profile TV series like The Crown and His Dark Materials. 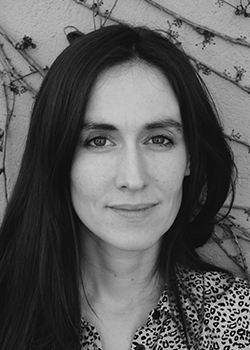 Anne-Sophie Versnaeyen is a French film music composer and songwriter based in Paris. From her classical background studying at the Conservatoire National Supérieur de Musique de Paris – Formation Supérieur aux Métiers du Son, she has developed a successful career as a film composer notably writing the music for Nicolas Bedos’ La Belle Epoque which was nominated for 11 César Awards and presented at the 2019 Cannes Film Festival.

La Belle Epoque follows a series of film releases including: Rayhana’s I Still Hide To Smoke (A mon age, je me cache encore pour fumer), Grand Prize winner at the Mediterranean film festival; Laurent Charbonnier’s documentary Chambord celebrating the 500th anniversary of Chambord Castle for which she was nominated by the IFMCA as ‘Breakthrough Composer of the Year’; Mon Cousin, the latest film from Jan Kounen (Coco Chanel & Igor Stravinsky).

In 2021 she composed the score of OSS 117 : from Africa with Love who was presented for the closure of Cannes Film Festival and Lynx by Laurent Geslin.
She is currently working on Nicolas Bedos’ lastest film Mascarade , set to be released in 2022.

From her first feature film in 2011, Jérôme Le Gris’ Requiem for a Killer starring Mélanie Laurent, Versnaeyen’s music is marked by strong and individual handling of the orchestra influenced by her classical background as a viola player. This attachment to the viola has had a big influence on how she composes keeping her in touch with the linear, melodic and contrapuntal aspects of composing. It has also influenced her with how she treats colour in her scores, concentrating on darker resonant textures using carefully selected ensembles mixing low winds such as bass clarinets and bassoons with the more resonant string sounds such as violas and cellos. This can be heard to great effect in La Belle Epoque where this rich sound is combined with tango- influenced music. The careful attention to colour and atmosphere also stretches into her use of electronics blending them effortlessly with the live aspects of her scores. 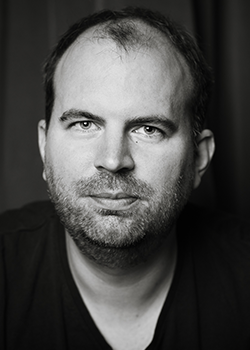 Christoph Zirngibl is a German film music composer, song writer and musician who lives in Munich, Germany with his family.

He is a Music & Sound International Awards and Camille Awards / European Film Composer Awards nominee and has been awarded several times, e.g. the Hollywood Music in Media Award (King Grandpa, 2017), the film music award of the New York Indie Film Festival (King Grandpa, 2018), the Jerry Goldsmith award “best composer” (2007) as well as the Price of the German Television Academy (Amnesie, 2016).

By now Zirngibl has written more than 80 scores for short films, prime time movies, feature films and TV series of various genres. His latest movie „Mia and me – The Hero of Centopia“, the feature adaption of the world-wide smash hit animated series „Mia and me“, produced by Studio100 and Flying Bark, will open in cinemas world-wide end of May 2022. 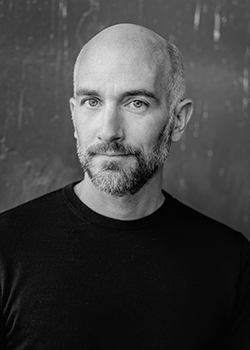 After he has studied classical composition in Paris’ High School of Music (CNSM), where he gratuated 4 diplomas, Ronan Maillard extends his knowledge in jazz, french song, pop and electro music. Then he starts to compose for short-movies and plays. Soon, he meets Martin Rappeneau, a french singer, and starts to orchestrate and arrange music for several feature films for him.

In 2012, he starts composing for feature films and wons the « Best Original Music Award» at Luchon’s Television Festival for his work on « Les Héritières », a French film for tv, screened on Arte channel in 2021. By the way, he works with french singers and their albums, as an arranger or orchestrator (Calogero, Pascal Obispo, Sinclair, Julie Rousseau, Geoffroy Gobry, Quint…).

In 2015, french director Xavier Giannoli calls him to compose the original soundtrack of his feature film, « Marguerite », which won 4 awards at the Cesar Awards ceremony in 2016 in Paris.

DISCO is proud to partner with Marché du Film as the official platform for Spot the Composer.

As the standard for managing and sharing music and media simply and intuitively, DISCO connects people and their passions with fast, intuitive and simple workflow.

DISCO lets composers, artists, managers, supervisors, and more devote their time to what matters most: the music.