EU project Immersify is coming to an end, research and development continues 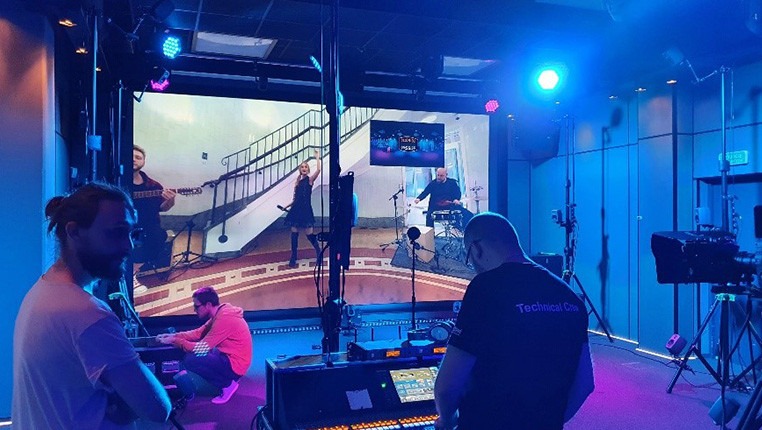 While Immersify officially ended with a panel at Festival de Cannes’ Marché du Film – Cannes XR, which was being held virtually due to the Coronavirus pandemic, the project partners are continuing their research on future developments in the field of immersive media.

The project researches, among other topics, technical possibilities with regard to video compression of immersive media and how immersive media content and tools can be designed interactively and promoted in the creative and media industry in Europe.

The project team produced around 25 immersive contents that were used to demonstrate the technical possibilities of the new formats and to test, improve and evaluate the tools developed within the project. The approximately 10 demonstrations, including 16K media playback and 8K live streams, made the project tangible not only for the establishing immersive media market, but also for a more general audience. Immersify was presented at several festivals, cultural events, technology fairs and conferences. In addition, several guidelines, which aim to make the tools and content of the project imitable for content creators, were published.

In mid-June, the project team presented some of the developed content and technologies one last time at a final live demonstration. The event included a demonstration of highly immersive and interactive media consisting of playback of newly created content with 16K 360° video combined with spatial audio based on high-order ambisonics.

The event also included an 8K live stream from PSNC’s laboratories in Poznan, Poland, to Ars Electronica’s Deep Space 8K in Linz, Austria as well as a 360° live video stream from PSNC showing the technology behind the stream and ambisonic sound production.

Two live demonstrations of some of the produced content were then streamed live on YouTube via Ars Electronica’s Home Delivery programme: The Great Pyramid in 3D and The Translucent St. Stephen’s Cathedral. All streams can be re-watched on YouTube.

Immersify was recently featured as part of this year’s Cannes XR Virtual—a program focusing on immersive technology products and works as part of Festival de Cannes’ Marché du Film. Due to the Coronavirus pandemic, Cannes XR was held virtually for the first time this year. In addition to a specially created VR area, through which VR works were made accessible, there was a live video stream with conferences, pitching sessions and project presentations as well as a 360° cinema.

In a panel, the partners gave some insights into the project process and discussed content created in this framework, obstacles the team was confronted with and what the future holds for immersive media technologies. The recording of the panel is available online on the Immersify project website.

Research and development continues despite the end of the project

With the conference at Cannes XR Virtual, Immersify may be coming to end for the project partners, but their research and development of immersive media technologies continues.

PSNC plans further improvements to its 360° multi-camera rig composed of several 4K cameras in order to enable higher resolution and better quality. This also involves a live stitching process, which is required to combine images from multiple cameras in real time. This will also enable future streaming of 360° video in 16K resolution. Another area of interest is the quality of experience assessment for High Order Ambisonics installation at PSNC.

Spin Digital is preparing the launch of a new 8K live encoder and a media player for high resolution 360° video and ambisonics audio based on the project results, and will continue working on audio and video technologies for the next generation of immersive media.

The Ars Electronica Futurelab is continuously working on the further development of its Deep Space 8K, a presentation of the latest installation—an interactive tour of Vienna’s St. Stephen’s Cathedral—is planned for the Ars Electronica Festival in early September 2020.

Visualization Center C will continue developing the interactive shows that were started and utilized during the Immersify project, which are normally used on a weekly basis for public audiences and which could be run interactively in some cases or in really high-resolution video playback. This all is in line with the goal of making immersive content that visibly differs from regular cinema experiences.

This project has received funding from the European Union’s Horizon 2020 research and innovation programme under grant agreement No 762079.