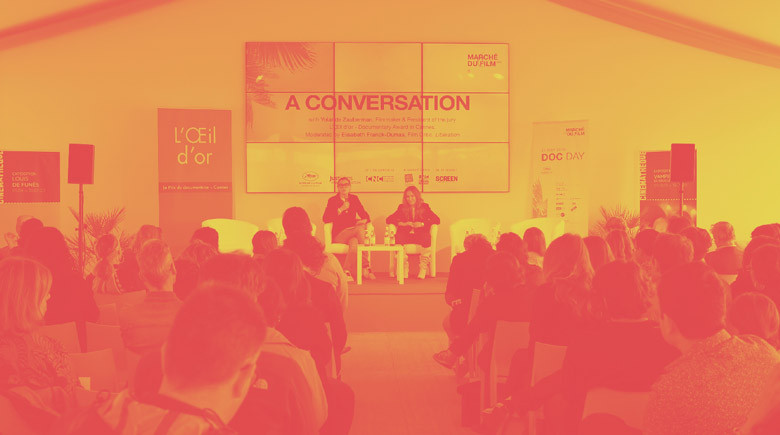 Eight festivals and organizations to showcase selections of docs-in-progress; first ever Cannes Docs Co-pro Speed Meetings from 23 to 25 June; Dieudo Hamadi special guest of the 5th edition of Doc Day on 26 June

The Marché du Film – Festival de Cannes announces the reinvention of Cannes Docs as a digital-only event offering feature documentary film professionals a dedicated platform to connect and a tailored program of events.

“Now that we are only a few days away from launching the Marché du Film Online, we realize how much creativity, hard work and commitment it takes to transport a film market to the digital sphere,” said Jérôme Paillard, Executive Director of the Marché du Film. “We are proud to team up with leading partners in the documentary field on this special edition to offer industry professionals around the world a new efficient market model where they will be able to discover projects, screen films, and find business partners.”

Festival partners will be actively involved in the program, notably by curating projects from their own forum & professional platforms for the Cannes Docs Co-Pro Speed Meetings, and by hosting exclusive Doc Talks on topical issues of the field.

From 22 to 25 June, Cannes Docs will showcase curated selections of docs-in-progress in finalization stage aiming to hit the film circuit within a few weeks or months. The Docs-In-Progress showcases are designed for decision makers looking for new titles, in particular festival programmers and sales agents.

Four prizes will be awarded to the winning docs-in-progress on Friday 26 June – compared to one last year -, during an online Closing Get-Together. Prizes are comprised of the Docs-in-Progress Award, in partnership for the second time this year with IEFTA – The International Emerging Film Talent Association, endowed with a €10,000 cash prize and professional project follow-up by IEFTA; the Impact Award, in partnership with Nordisk Panorama, providing a 2 hour consultation on the film’s impact and outreach strategy; the Cineli Digital Award, with a DCP offered by Cineli Digital, Paris, France; and the VOSTAO Award, with French and/or English subtitles offered by VOSTAO, Brussels, Belgium.

The Docs-In-Progress Jury will be composed of Head of the Baltic Sea Forum for Documentaries in Riga, Latvia, Zane Balčus; French-Palestinian-Algerian filmmaker and actress, Lina Soualem – and winner of the 2019 Docs-in-Progress Award with her project Their Algeria -, and Impact & Workshop Manager at Nordisk Panorama, Lea Maria Strandbæk Sørensen.

Pierre-Alexis Chevit, Head of Cannes Docs, said: “I am truly thrilled that the shift-to-online didn’t stop the ongoing expansion of the number of docs-in-progress showcases within the Cannes Docs program. We’ll be presenting no less than 32 projects in finalization stage – i.e. 8 more than the last two years –, curated by film commissions, festivals and organizations from all parts of the world. We also multiplied the number of awards, and are counting on a substantial number of decision makers attending (including of course some who can’t usually attend Cannes physically). All of this solely to give a maximum of chances of success to all the projects, for them to hit the market and festival circuit magnificently!”

As a novelty this year, the Cannes Docs Co-Pro Speed Meetings will be held over the course of 3 days, from 23 to 25 June. Potential co-producers and funding partners will be able to connect with 14 Spotlighted Projects selected by key festivals and organizations, including Cinema For Change, CPH:DOX, DMZ Docs, DOK Leipzig, IDFA, IEFTA, Ji.hlava IDFF, La Fabrique Cinéma | Institut français, Visions du Réel and When East Meets West. Marché du Film Online participants will receive within the next few days an update on how to access the speed-meetings.

Doc Talks, informal Hangouts and workshops as a cornerstone of the program

Doc Day will be transported to the digital sphere, encouraging participants to gather and take a step back to reflect on how the documentary genre is continuously evolving as a marketplace, as an artistic form, and as a tool to raise awareness and drive global change.

Dieudo Hamadi’s feature film, Downstream to Kinshasa (En route pour le milliard) – repped at the Marché du Film Online by AndanaFilms-, is one of the documentary films in the Festival de Cannes Official Selection 2020 and the very first film from the Democratic Republic of the Congo in Official Selection in the history of the Festival de Cannes. The film portrays the victims of the Six-Day War in the Democratic Republic of the Congo who have been fighting for two decades in Kisangani for the recognition of this bloody conflict and who are demanding compensation. Tired of unsuccessful pleas, they finally decide to voice their claims in Kinshasa, after a long journey down the Congo River.

Doc Day is organized in partnership with CNC and L’Œil d’or – Documentary Award in Cannes.

Two additional satellite collaborations will give the final touch to the program, in line with this year’s dematerialized reality.

French/European doc-only SVOD platform Tënk will offer 100 free 3-months trials to Cannes Docs participants (more information on how to sign up to be announced soon) and will present its subscribers, during the Marché du Film Online, two films previously showcased at Cannes Docs as docs-in-progress: Ibrahim: A Fate to Define, by Lina Al Abed (2019) and In Mansourah, You Separated Us, by Dorothée-Myriam Kellou (2019).