Le Musk by A. R. Rahman, a Brave New Frontier in the Cinematic Sensory VR Experience. To Premiere at Cannes XR This Month 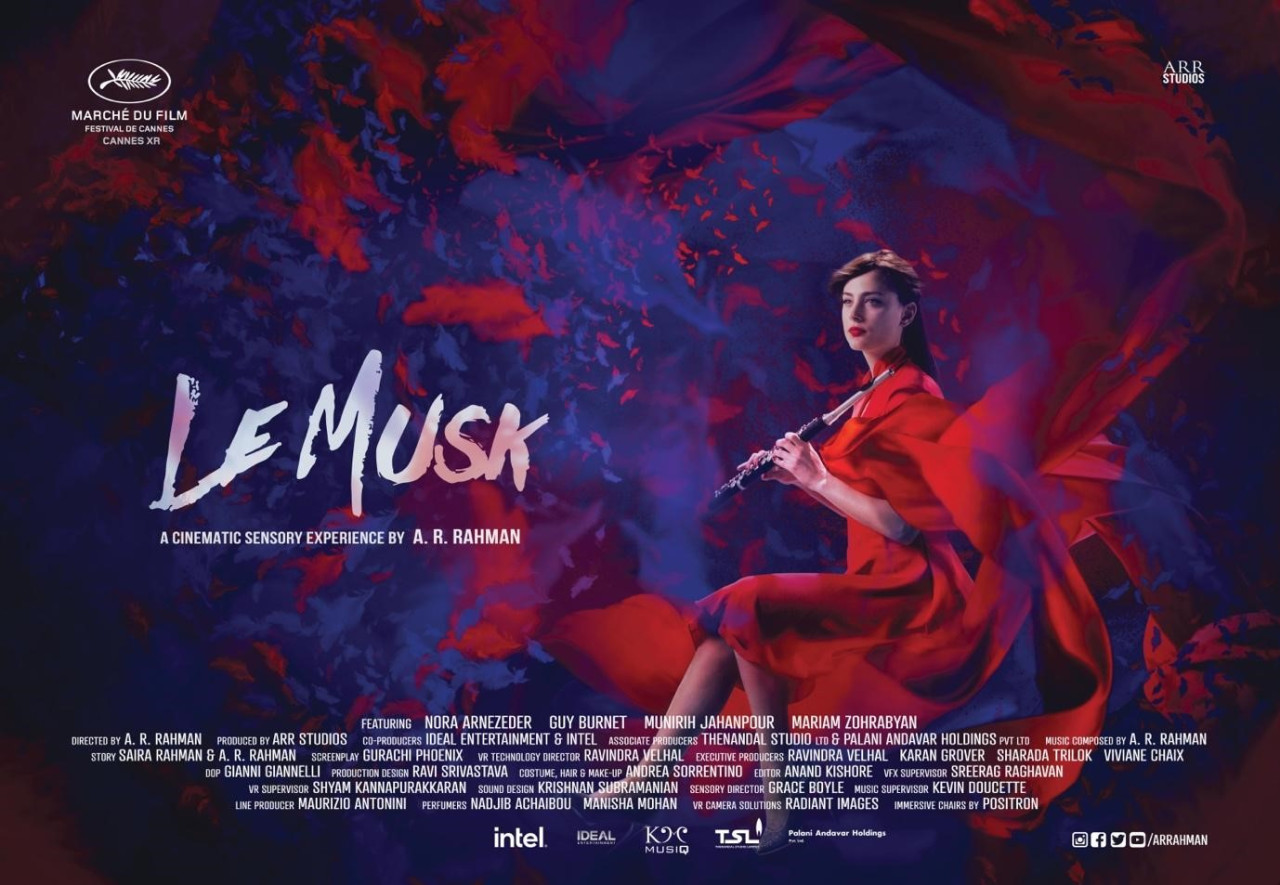 With scent being the key to unlocking the story, the movie is immersive, pathbreaking and unparalleled as it marks a new frontier in cinema. Directed and scored by Oscar and Grammy-winning composer A.R. Rahman — who makes his directorial debut with the film — Le Musk is all set to exclusively premiere at Cannes XR in collaboration with Marché du Film, a part of the 75th Cannes Film Festival. Punctuated by scent, motion and music, Le Musk is a feature that ushers new ground in art and technology, merging worlds, mediums and cultures.

The 36-minute film features a global star cast comprising Hollywood actress Nora Arnezeder (Army of the Dead) and Guy Burnet (Oppenheimer) in lead roles, joined by Munirih Grace and Mariam Zohrabyan from Armenia. The film, where technology meets the storytellers, constructs a compelling world of music, motion and scent, following the journey of an orphaned heiress and musician, who grows up to be a woman on a mission. Despite her tumultuous life, she has one constant companion – the lingering Muskan scent.

“‘Le Musk’ has been several years in the making with collaborators worldwide; we’ve aimed to create an unprecedented, subtle sensory cinematic surrealism. Creating a feature-length Cinema VR experience that pushes boundaries of storytelling and incorporates multiple senses was a guiding force for me. Aroma and music together bring warm memories subjectively for the audience.”

Centering an unforgettable protagonist in Arnezeder’s Juliet, Le Musk is an ode to music and memory. The movie is a potent portrait of a woman spurned by the oldest, most treacherous quest of humankind — revenge.

Juliet yearns for normalcy, but her past doesn’t allow her the luxury of mundanity. Dipping into the abstract trenches of the woman’s psyche, Le Musk constructs a compelling world of music and scent that lay bare sinister and pure motives. As Juliet searches for the four men — the injured, the tattooed, the poacher and the ‘Musk’ — she must come face to face with the price of her purpose and confront the persistent presence of the past. As she inches closer to discovery, will she endure or will she break… irreversibly?

The idea for Le Musk was born out of director Rahman’s conversation with his wife Saira Rahman. The partners share a love for perfume and wished to employ scent as a narrative device in immersive cinema. They tapped into the infinite possibilities posed by immersive VR soon after their exchange. Gradually, the world and characters of Le Musk took shape in the artist’s mind.

“Working on the VR experience “Le Musk” under director A.R. Rahman has been a beautiful journey where we found new artistic expression. Through ‘Le Musk’, we’ve unlocked a new, expansive frontier in storytelling where we hope to inspire and inquire through the senses. This film is an experience unlike any other. We hope you choose to witness this alluring new world!”

Shot in Rome, Le Musk is a technical masterpiece with inter-disciplinary expertise coming together from around the world. Shot on 14 different cameras capture super-resolution quality video. Post-produced in stereoscopic 360 VR workflow at higher resolution and frame rate, Le Musk’s was finished by 10 VFX houses from around the world with close to a petabyte of data.

Collaboration with Marché du Film / CannesXR allows the project to be experienced at the immersive VR chair by Positron, the Los Angeles-based company. All that with motion, scent, immersive sound, and haptics integrated.

“Imagined with Intel and partners, the creative genesis of the film heralds a new frontier for new-age immersive storytellers like A.R. Rahman. The film has state-of-the-art technology meeting the storyteller to push the boundaries of Immersive Cinema. With motion, music and scent integrated into the narrative, making it an unparalleled Immersive VR Cinema of its era – in ways you’ve never experienced before.”