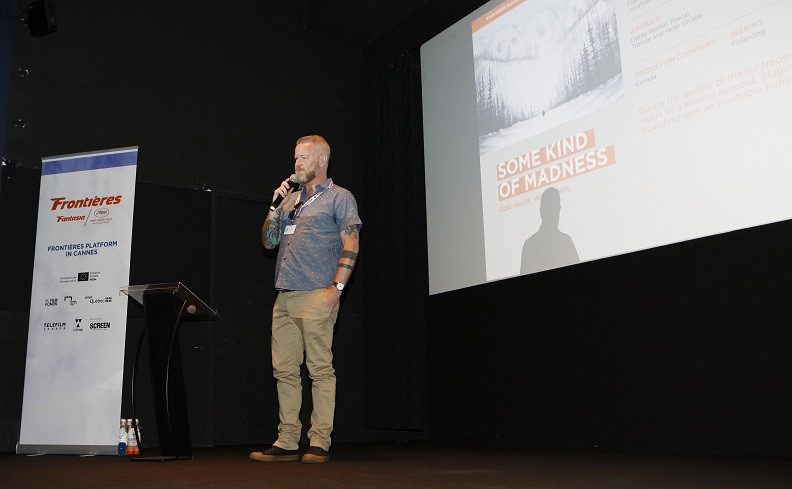 From May 12-13 the genre-focused division of Industry Programming Frontières Platform in Cannes will return for a second year to the Marché du Film after an extremely successful inaugural edition last year. A co-presentation between the Fantasia International Film Festival and the Marché du Film, the Frontières Platform activities will encompass the Proof of Concept Presentation for projects in the advanced financing stages, and the Buyers Showcase for films in post-production or recently completed.

The Frontières Buyers Showcase will take place on Sunday May 13th at 4pm in Palais K. The presentation will feature 6 films, with producers screening footage for potential buyers, sales agents and festival programmers. Marché du Film participants will have a first look at the latest from: Denis Côté (BESTIAIRE, VIC + FLO SAW A BEAR), Jovanka Vuckovic (XX) and Antonio Tublen (LFO), amongst others.

After workshopping their proof of concept videos at the Frontières Finance & Packaging Forum in Amsterdam this past February, 10 projects will present their completed teaser trailers to prospective partners at the Frontières Proof of Concept Presentation taking place Saturday May 12th at 10am in Palais K. The selected projects includes new works from teams behind: FREE FIRE, CRUMBS, BASKIN, REPLACE, THE LODGERS and the upcoming ANIMAS.

“We are excited to bring to Cannes these 16 genre film projects which have been supported at various stages of their development by the Frontières Platform. Many of them are already bridging Europe with America and we hope that their presentation at the Marché will give them new opportunities for a worldwide distribution.”

Frontières is also excited to announce the establishment of the Avanpost Digital Cube Post-Production Award. One project from this year’s Finance & Packaging Forum will receive an award of $150,000 of in kind post-production services from the Romanian company Digital Cube.

“We are thrilled to support films in elevated genres, in partnership with Frontieres, through the Avanpost Digital Cube Award, by facilitating access to cutting edge post production services for art house films. We are excited to work with up & coming young directors and producers and promote European and North American films at the Marché du Film in Cannes, a first for a Romanian film production company.”

This year’s selection includes a diverse range of countries represented, including: Canada, Denmark,

Estonia, Germany, Ireland, Spain, Sweden, Turkey, the United Kingdom, the United States and for the first time at Frontières, a South American project from Chile.

“I’m glad to have our new partner CinemaChile on board this year. We are very fortunate that they are bringing a project created by promising talents from a vibrant Chilean cinema.”

Frontières is co-funded by the Creative Europe program of the European Union. The Frontières Platform in Cannes is made possible thanks to the support of Wallimage, Cinema Chile and Telefilm Canada.

GIRL WITHOUT A MOUTH (Turkey)

JESUS SHOWS YOU THE WAY TO THE HIGHWAY (Spain/Estonia/Ethiopia)

FRONTIÈRES is an international co-production market and networking platform specifically focused on genre film financing and co-production between Europe and North America. It is organized by the Fantasia International Film Festival, in partnership with the Marché du Film – Festival de Cannes. In addition to its annual co-production market at Fantasia (July 19-22 2018), Frontières programming also includes a Finance & Packaging Forum (February 22-24, Amsterdam) and the Frontières Platform (May 12-13, Marché du Film – Festival de Cannes)